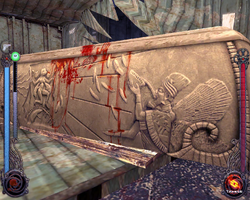 The Ankaran Sarcophagus is a key plot element in Vampire: The Masquerade – Bloodlines. It can only be opened using its key.

The Sarcophagus is an ancient artifact originally unearthed in 1068 AD near Ankara, the capital of Turkey.

In early 2004, the Sarcophagus was discovered by Dr. Ingvar Johansen and was on its way to the Museum of Natural History for examination. Bloody handprints on its surface found while aboard the Elizabeth Dane, indicated it may have been opened from the inside. The vampires of Los Angeles circulated rumors that the sarcophagus held an Antediluvian, a third-generation vampire, one of the eldest and most powerful in existence, and also a sign of Gehenna, the vampire "end of days" scenario.

The vast majority believe that it should never be opened, or even destroyed entirely. Scholar Beckett believes it to hold nothing more sinister than the mummy of an Assyrian king, a hypothesis confirmed by Dr. Johansen, who however brings to note that this king was attributed with 250 years worth of achievements. He dismisses the idea that the king could have lived for the entire span of time, however, believing that previous royal names were probably just erased, or that the name was passed onto subsequent generations. The surface murals depict figures drinking bowls of blood, which Dr. Johansen stipulates was more of a result of rituals or simply the royalty's way of dealing with porphyric disorders, rather than any proof that whatever lies inside is a vampire.

This belief would prove accurate; as the inhabitant is seen in the presence of Smiling Jack and is quite clearly a mummified and fully dead human. Jack had in fact deliberately put the Sarcophagus out into LA and created the suspicious events surrounding it, in order to create a panic among the city's Elders. Jack's plan was that they would kill one another in the scramble to obtain it, believing they could either destroy or diablerise the Antediluvian they believed to be inside. The victor however, would instead find a large quantity of C4, set to go off moments after the sarcophagus, with only a mocking note from Jack to even hint at why.