Heather Poe is a supporting character in Vampire: The Masquerade – Bloodlines. She is a young woman whom the fledgling may come across and become involved with over the events of the game. She is a potential ghoul.

Heather is a fashion design student attending college in Los Angeles, living alone with her grandmother. Prior to the game's events, her parents died in a car accident.

She can be found critically injured in an operation room of the Medical Clinic, located in Santa Monica. If the fledgling spoke with Knox Harrington or asked Mercurio about vampire blood earlier, the option to save her by offering vampire blood will be available. If this does not occur before the completion of the Elizabethan Rendezvous quest, she will die from her wounds.

If saved, Heather shows up a few nights later, in front of the Venture Tower in Downtown to thank the fledgling for saving her life. The fledgling then has the option of either letting her live with them, or freeing her from the blood bond.

Depending on the installed patch, it is possible to save Heather from an otherwise unavoidable death. With the unofficial plus patch, telling her to remain indoors and out of sight will keep her safe and ultimately alive.

Note: Telling her to stay inside will disable her final gift of the body armor. The only other way to obtain it is through the aforementioned plus patch, where it is available for purchase from Mercurio during the Out for Blood quest.

It is also possible to keep her alive by typing G.Heather_Indoors = 1 into the console.

The last chance to release her is before the Society for the Preservation of Professors quest is initiated or completed. If she is not released in any other version of the game, she will die as part of the story.

It is difficult to guess who Heather really was before she met the Protagonist. Her thinking and behavior were likely altered significantly by the blood bond. She seems to have been an average person though perhaps more kind and naive than some. She may have been depressed after the death of her parents and lonely because she had no one special in her life. This could explain why she seems to view the Protagonist as a kind of lover regardless of their feelings towards her.

After the fledgling saves her and takes her on as a ghoul, she becomes extremely attached to the point of obsession, constantly worrying and asking after them. Her acts of affection could be seen as childish and naive, as if she is very inexperienced with relationships. She seems to be doing everything and anything to please the fledgling but isn't sure what they want. One example is when she abducts a man who followed her home and locks him in the fledgling's haven bathroom for the player to feed on later. If the protagonist is a Malkavian, she refers to this man as "a fish" for the fledgling's consumption.

Her behavior is quite different if the fledgling is a Malkavian. She ordinarily shows some apprehension about the actions she takes such as abducting the man or drinking the Fledgling's blood. Though she may be more afraid of displeasing the Fledgling than anything else. As a Malkavian ghoul, she is not at all hesitant about taking any of these actions and seems to shed the concerns of the human world much more quickly. 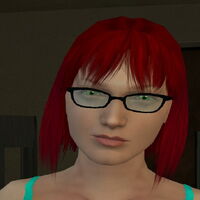