Imalia is a character in Vampire: The Masquerade – Bloodlines. She is a Nosferatu living in the Warrens beneath the Hollywood Forever Cemetery. She is a former supermodel and the childe of the Nosferatu leader "Gorgeous" Gary Golden.

Imalia was once a supermodel of notorious beauty, featured in various types of media such as billboards, magazines and television. However, she was vain and arrogant, and unfortunately for her this brought her to the attention of the vanity despising Nosferatu clan.

Imalia remembers the night she was Embraced by Gary well. She had just won Guy magazine's Most Ridiculously Hot Chick In The Known Universe Award in 2003, and returned to her home only to find Gary Golden sitting on her couch with a martini in his hand.

After being Embraced, Imalia soon faked her own death, making it look like her car had been wrecked on a cliff side. Within the car the authorities found a body which was burned beyond recognition and she was declared dead.

Imalia made her home in the communal haven inhabited by the Nosferatu. Her room was a small one with a computer, the Sin Bin's neon sign, John Collier's Lilith, and a mattress for her to sleep on. The most striking feature in the room is her poster of Tawni Sessions, which she has vandalized with criticisms.

Imalia hates Tawni because she sees her as an upstart who is nowhere near as good as she was. Imalia seethes at every success Tawni has and constantly criticizes her physical features.

Before her Embrace, Imalia was a selfish and vain diva; all this changed when she became a Nosferatu. As a Nosferatu, Imalia was miserable, immoral, cold and spiteful. She still hasn't gotten over her lost beauty or the fact that her place in the spotlight has been usurped. She was also obsessively hateful when it came to Tawni Sessions. While she was alive, she was immensely popular.

Imalia prior to the Embrace 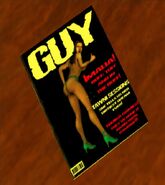