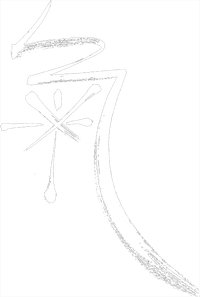 The Kuei-jin are the corrupted descendants of the Wan Xian, the "Ten Thousand Heroes" chosen by the August Personage of Jade to guide and protect the universe in ancient history (and the predecessor to the Exalted). The Wan Xian were originally chosen by tests of skill and courage, and fed on the ambient chi of the universe. However, they fell from grace, learning to feed off of the chi of living beings and corrupting the tests of worthiness. Their children, the Jin Hai tried to keep them on the path of righteousness, but were eventually killed for their presumption.

As the blood of the Golden Children cooled, the August Personage pronounced judgment on His former champions. He cursed them to live as undead, unable to acquire chi except from drinking the blood of the living, and to exist in a brutal mockery of their former state. He revised the tests so that the former heroes and champions were replaced by criminals and murderers who escaped from Hell itself. Then He left the Wan Kuei alone to contemplate their crimes.

Since that time, the Wan Kuei, the fallen Wan Xian, have developed a redemptory religion while occupying an ecological niche akin to Western vampires. There are many paths initially ascribed to Xue, the Grand Arhat of the dead. However, the road to the Hundred Clouds is long, and the Kuei-jin are ultimately forced to stay on the Wheel of Ages as history slowly grinds towards the inevitable victory of hell and the rise of the Demon Emperor.

The Kuei-jin are physically akin to the Risen, in that their physical bodies are powered by mystical energy and that energy serves to heal them. Unlike the Risen, who rely on pathos to power them, the Kuei-jin use chi. Depending on the type of chi used, a Kuei-jin's body will have different attributes – ranging from a low-energy corpse like state, to a feverish state close enough to life that they can create new life. Apart from being faster, stronger and tougher, a yang aspected Kuei-jin appears to be a living human being.

Kuei-jin are less tied to their bodies than might be expected – because they are spirits wearing bodies, they can take an enormous amount of damage, including a little death that wipes out the body and forces the Kuei-jin to seek out a new host. There is a subspecies of Kuei-jin, the Yulan Jin who do this on a regular basis.

Kuei-jin are effectively unliving chi batteries; they need and hunger for chi the same way that the Kindred hunger for blood, and they need no other sustenance, although they take more pleasure from food and sex than the damned do. With the right chi, Kuei-jin can even withstand the sun for a short period of time. Chi is divided into Yin and Yang, which have both drawbacks and advantages when Kuei-jin imbalances himself to one of them.

Kuei-jin are not created through the act of another, like western vampires are, and their numbers are limited and cannot be easily replenished. Their blood has no supernatural properties of its own and cannot create Blood Bonds or ghouls.

The sun is just as dangerous to the Kuei-jin as it is to their western cousins. Kuei-jin, however, do not begin to burn when exposed to sunlight, instead, their flesh begins to rot until nothing remains but a putrified carcass.

Ostensibly, the name "Kuei-jin" is supposed to represent the two major cultures involved, with the Mandarin ghost (鬼, kuei) and Japanese person (人, jin) being combined into a single name. Unfortunately, this would only make sense with Western audiences, and wouldn't make any sense at all with the writing systems of the cultures in question.

The same root writing system is used for both Mandarin Chinese and Japanese. A Chinese speaker seeing 鬼人 would read it as "guei-ren" (ghost person), while a Japanese speaker seeing the same characters would read it as "oni-bito" or "ki-jin" which refers to the Kun/On readings of the characters (ogre/demon person). While the meaning remains the same, there is no way to write the phrase in a manner which would be read as "kuei-jin" by either culture, unless using a Western alphabet.