View source
watch 02:52
Roblox: DeepWoken - The Loop
Do you like this video?
Play Sound

The Malkavians are one of seven playable clans in Vampire: The Masquerade – Bloodlines. Malkavians are all clinically insane; the mental illnesses they suffer range from schizophrenia to near-catatonia. Strangely enough, they are a pillar of the Camarilla; historically they've been Kindred's seers and oracles, bound by strange insight and compulsions. This insight is reflected in the unique set of dialogue options (in a different font) for the Malkavians and encounters with NPCs that you'd never see with the other clans.

Malkavians carry the curse of madness, each childe gaining a degree of insanity after their Embrace. Their unhinged minds allow them to see things other Kindred cannot, a trait often referred to as the 'Gift of Insight'. A Malkavian's level of madness varies; no two Kindred of the clan seem to be the same, from emotionless sociopaths to raving lunatics and everything in between. Their blood can also pass this madness onto their Ghouls, twisting their mind and personality from the moment they ingest it. 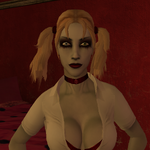 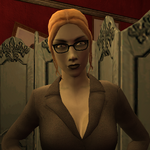