watch 03:41
Wiki Targeted (Games)
Do you like this video?
Play Sound

The Ocean House is a location in Vampire: The Masquerade – Bloodlines. It is an abandoned hotel which closed after a series of grisly murders. It is a featured destination in the quest The Ghost Haunts at Midnight, given to the fledgling by Therese Voerman. The hotel has been recently renamed as Ocean View Hotel.[1]

On the 30th of May, 1958, a family visited and stayed at the Ocean House hotel for a week long holiday to experience the hotel's grand opening.

According to a diary belonging to the wife, the family's stay was at first a pleasant one. But as days passed, husband Ed became distant. It is revealed in the diary that Ed believed his wife was having an affair; he thought her newly bought locket was from the purported-to-be man, when it was in fact a gift from her mother.

Ed's obsession with the locket continued to grow; the diary states how the wife caught him once holding and staring at it. As his obsession consumed him he began to ignore his children and his wife until the last day of their stay, in which he then disappeared.

The diary reveals on the last day of their week long visit that, against her wishes, Ed Jr. ventured down into the basement to find his missing father, only to never return. The wife planned to send her daughter Tiffany to find Ed Jr., but she was interrupted by a knock at the door. The diary continues as follows:

As the fledgling progresses through the hotel, a number of newspaper articles can be found, revealing further the events which unfolded at the Ocean House. According to two separate articles, the children Ed Jr. and Tiffany were killed. Ed Jr. was murdered and decapitated in the basement, his head later placed in a laundry machine, while Tiffany was chopped up "like fire wood" in a hallway.

The last newspaper article found on the third floor reveals that the murders were never fully solved, as the title states both 'Mother and Father could be Ocean House Axe murderer.' 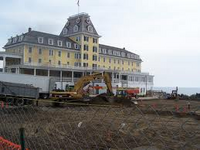 The real-life Ocean House, under repairs in a similar manner to the one in the game.
Add a photo to this gallery

Retrieved from "https://vtmb.fandom.com/wiki/Ocean_House_Hotel?oldid=23459"
Community content is available under CC-BY-SA unless otherwise noted.