Vampire: The Masquerade – Bloodlines Wiki
Register
Don't have an account?
Sign In
Advertisement
in: Deceased Characters, Ghosts, Mortals,
and 2 more

The Ocean House Victim is an unnamed woman whose ghost haunts the Ocean House hotel. Depending on the player's actions, she can be released from the hotel or trapped there forever.

Revealed through her diary, the Victim was married to a man named Ed. They had two children, Ed Jr. and Tiffany. They all stayed at the Ocean House hotel as part of their holiday in Santa Monica, to enjoy the hotel's grand opening.

Their visit started on May 30, 1958. According to her diary, she was extremely happy to be in Santa Monica. At first their stay was a pleasant one. Unfortunately, after wearing a locket given to her by her mother, her husband, Ed, began to act strange. After a short while, he accused his wife of receiving the locket from another lover. Despite her best efforts to convince him, she could not make him believe otherwise.

Over the course of the next few days, Ed became more and more distant, refusing to speak to his children or his wife. On June 5, he killed his wife and children, butchering them with a fire axe, and then set the hotel on fire.

The Ghost Haunts at Midnight
During the "Explosive Beginning" quest, the player must speak with Therese Voerman to convince her to blow off the feud with Bertram Tung. Therese agrees to call off the feud, but only after the player has taken care of a spirit that is haunting her latest investment.

Spiritual Release
After reading the wife's diary found in the kitchen, it is confirmed that the female ghost haunting the Ocean House hotel did not die of natural causes, but murder. Her spirit is trapped within the hotel by her husband's undying possessive and jealous nature, and so she requires the help of the player. 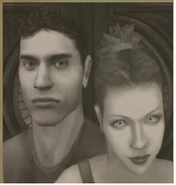 The victim and Ed, while still alive.