Jack (also known as Smiling Jack) is a character in Vampire: The Masquerade – Bloodlines. He is a Brujah vampire, and member of the Anarch Movement, based in The Last Round in Downtown LA.

Born in the year 1611, Jack grew up to be a pirate operating in the Caribbean, and although he would encourage others to believe he was captain, he could never actually rise above the level of second mate. This was because his violent nature and wild temper caused other pirates to distrust him. However, they did admire him for his strength and loyalty to his shipmates.

Jack lived a long time for a pirate and at the age of 40 he retired to Barbados and had amassed quite a fortune from piracy and bought himself a pardon. Jack had trouble settling down and ended up on the run from the law after beating up a pompous aristocrat who was rude to him. Jack was found by his sire, a Brujah woman known as Mama Lion, who had been fighting Ventrue expansion in the Caribbean. When Mama Lion offered Jack an eternity of battle against oppression, Jack readily accepted.

Ever since Jack has been a proud Brujah and a sworn enemy of the Ventrue. Jack had been leading the Anarch Revolt in Los Angeles against the former Toreador prince, Don Sebastian. Since his days as a pirate, Jack has adopted a biker style and is immensely popular among young Anarchs who adore his bold style. He is a master of the Celerity and Potence Disciplines and knows many other tricks. He is an extraordinarily powerful vampire, who disposed of two Sabbat vampires with relative ease. Despite his appearance, Jack is not easily provoked in open battle, but his mischievous and under-handed tactics and tricks have made him legendary amongst the younger Anarchs.

Rumored to have been a pirate in his mortal years, Smiling Jack is a Tenth Generation Brujah, childe of Mama Lion. A presumably powerful and influential Ancilla during the Final Nights, Smiling Jack is one of the most infamous of all anarchs. His appearance is unassuming – the wild hair and mangy look of a Brujah street bum, but from what has been pieced together, Smiling Jack is a clever planner and a master of the Potence and Celerity Disciplines, favoring them over Presence. He almost undoubtedly knows many other tricks; however, he seems to eschew the use of manipulative Disciplines such as Dominate or Thaumaturgy. Jack's influence within the Anarch Movement is strong, though he absolutely refuses any formal leadership role. He acts as a mentor and, more importantly, as a friend to many vampires. He seems to have a particular dislike for both the Camarilla in general and the Ventrue in particular. He is not easily provoked into open battle, but his mischievous and under-handed tactics, and his tricks are legendary among young Anarchs.

Smiling Jack is known to enjoy disrupting the Ventrue reign in cities, mostly Embracing indiscriminately, provoking a rise in Caitiff numbers, and even going as far as to thread the events that would ultimately cause the Final Death of Sebastian LaCroix, the Ventrue Prince of Los Angeles in 2004. It's rumored that Smiling Jack is one of the few modern Vampires who has met Caine.

The embodiment of anti-establishment and rebellion, Jack doesn't care about rules and regulations. He is against politics and fights for freedom. He resembles very much to a biker, both physically and mentally. Jack is very violent and hot-tempered. However, when the situation calls for it, he can be extremely calm and level-headed as he knows to be careful around cellphone cameras. He is also very analytical, preferring to watch closely than act. He hates the Ventrue and would do anything to cripple their power.

Unlike other vampires, Jack is a tolerant individual when it comes to personal opinions. He acts friendly towards the fledgling no matter the path they take. He is also very knowledgeable about the modern times, aware of drugs such as heroin, and comic books.

Jack claims to think about ordinary humans the way humans think about cattle: he wouldn't go out of his way to kill them for no reason, but he also doesn't particularly care one way or another if they die.

Smiling Jack is an extremely powerful vampire, who uses his clan's Disciplines of Potence and Celerity to great results. Using those, he was able to dispatch two Sabbat vampires with no effort. He also met the Tzimisce at some point in his existence. He also has exceptional senses, being able to sniff someone's presence and even detecting the quality of that person's blood. 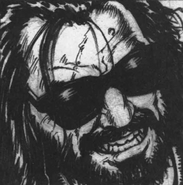 Smiling Jack as he appears in Los Angeles by Night