Tawni Sessions is a popular model and local celebrity, based in Hollywood. She is an enemy, whether she knows it or not, of the bitter Nosferatu Imalia.

At some point after Imalia's apparent death, Tawni became an extremely popular model, which made the Nosferatu woman hate her with a passion. Because of this, Imalia asked the fledgling to install web cameras inside Tawni's hotel room for her to spy on her rival. When the fledgling completes the mission, it is revealed to the press that Tawni and her boyfriend were engaging in zoophiliac acts with a llama. With her reputation and career destroyed, Tawni committed suicide by taking half of a bottle of Valium and chasing it with a fifth of gin. 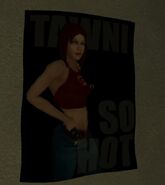