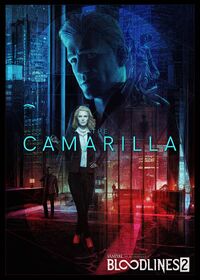 Very few cities boast a vampire elite as wealthy as Seattle. In these refined circles, your true worth shows in how you much control your money has bought you. Here at the top, a comfortable existence - not having to worry about access to blood and having to hunt - is all but guaranteed.

Amongst the Camarilla Kindred loyal to Cross you’ll find CEOs, software moguls, bankers, venture capitalists, politicians and other members of the business elite.

Led by Prince Cross and ingrained in the corporate landscape of Seattle, the Camarilla has managed to turn its connections to tech billionaires and investment bankers into dominion over the Emerald City.

Seattle has become one of the most lucrative tech- and business cities in the world. In the shadows of that boom, a new kind of Kindred has emerged in the city: Sleek, business-minded; ready to influence the city from the top-floor board rooms.

After 20 years at the top, every member of Cross’ faction is still very aware of being the city’s biggest target. While Cross knows that not every vampire in the city accepts the Camarilla, he has given them just enough power to not having to worry about them organizing and moving against him. Stability, prosperity, and the Masquerade have been the key components of his policy.[1]

More about The Camarilla