Camarilla (as Therese and Tourette)
Anarchs (as Jeanette)

Therese Voerman (also known as Jeanette Voerman) is the Malkavian Baron, as well as the aspiring Prince of Santa Monica and the proprietor of The Asylum, a nightclub in the area of Santa Monica.

Therese's exact age is unknown, but Jeanette mentions their last sunrise as being over two lifetimes ago. Therese was a little girl when she first showed signs of mental illness, namely dissociative identity disorder, which came in the form of an alter called Jeanette.

Therese states that she and Jeanette did get along at one point, mainly because she didn't have many friends due to her father never allowing her out, saying that she would get hurt in the outside world – as a result, Jeanette was the only one who was there for her and they would create their own fantasy world which they would rule over.

Therese's only other known relation from her time alive was her father who would molest her. Therese blames Jeanette for his depression, saying that her bad behavior was tormenting him. Therese simply saw this as her being a good and obedient daughter, and she was convinced her father loved her.

Therese's father died later on; Therese says their father killed himself because Jeanette was a bad daughter and tormented their father with her promiscuity, while Jeanette claims that their father came home drunk one evening and mistook Jeanette for Therese and began molesting her instead. Therese caught them together and shot him in a jealous rage, "blowing his mind all over the silly clown wallpaper".

The police found out about his death and figured one of her personalities had killed their father. It is heavily implied Therese was placed in a mental institution, where they briefly suppressed Jeanette from her mind, and she must have remained at the institute until young adulthood. Jeanette mentions an escape, claiming the first thing Therese did was find Jeanette. It is likely she is talking about her Embrace by an unknown Malkavian, which may have brought about Jeanette's return as Malkavian blood is inherently insane.

Therese rose to power in Los Angeles as the Baron of Santa Monica and as a successful businesswoman. Her base of operations and her primary business source was the Asylum, a nightclub in her barony. She ran through finances and business side of things, while Jeanette lured in patrons for the club.

When the Camarilla became a presence in Santa Monica once again under Prince LaCroix, Therese sought to ally herself with him and the Camarilla. Jeanette favored the Anarchs and was in direct contact with Smiling Jack.

Therese had invested in many new business ventures, one of which Bertram Tung and Jeanette ruined for her, causing a feud between her and Tung, causing the latter to go into hiding. One of her most promising investments was the Ocean House Hotel, opened in the early 20th Century and was a popular destination for vacationers until an insane guest decapitated his wife and children while staying there. The scandal hurt business, and the Ocean House was subsequently abandoned.

Later, the ghostly presence of the wife haunting the building scared off the workers, fouling Therese's renovation plans for the hotel. The protagonist is tasked with retrieving a personal artifact from the site to exorcise the spirit, which they can give to either sister; to Therese so that her employees can resume their work, or to Jeanette to throw it away.

Afterwards, Jeanette manipulates the protagonist into ruining another of Therese's businesses, Gallery Noir, an art gallery in which Therese was to host a charity event for the many influential Santa Monicans. The paintings therein, depicting Caine and are to be slashed, and optionally, they can steal the charity box.

Upon returning, Therese is furious over the destruction of her event and claims to seek reconciliation with Jeanette and tasks the protagonist to meet her at the Surfside Diner which turns out to be a setup by the sister that received the pendant. After dispatching the gang, the phone at the back of the diner rings and it is hinter at that Jeanette is in danger, urging the protagonist to return to the Asylum. There, Therese and Jeanette are competing for control over the host body holding a gun. One side of her face is without make-up and her

There are three possible fates for Therese:

If Therese is alive (regardless of Jeanette's fate), Santa Monica sides with the Camarilla, otherwise it becomes aligned with the Anarchs.

As a person, Therese is ruthless and cunning, with a superb mind for business, but not without morals; she genuinely cares for Jeanette and believes she is responsible for her survival as a vampire. Being a prude, she is extremely pious and chaste, and thinks vampires superior to humans, expressing her disgust at the thought of Jeanette having sex with mortals. She is not so open about her clan heritage as her sister is and looks down on the Nosferatu, especially Bertram Tung.

Jeanette is highly sexually promiscuous having numerous lovers, including various mortals and, potentially, the protagonist. She is very needy and uses a mix of her childish nature and potent sexuality to get what she wants. She often makes petty quips about Therese, calling herself the "Prettier Face" and mocking Therese's snobbery calling her "Queen Victoria" and "the Virgin Queen of the Night".

One thing they both have in common is that they both believe themselves to be the "good" sister, particularly regarding their father; while Jeanette sees Therese's incestuous molestation by their father as Therese being just as sexually depraved as she is, Therese saw it as being an obedient daughter.

She is a powerful vampire – she holds control over her domain and her nightclub is an Elysium. Additionally, she can't be Dominated by the Protagonist. 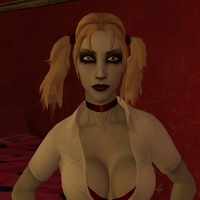 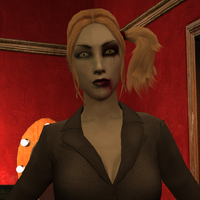 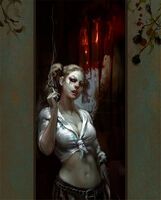 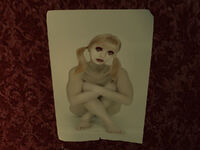 The two sisters Jeanette and Therese standing next to a man, presumably their father